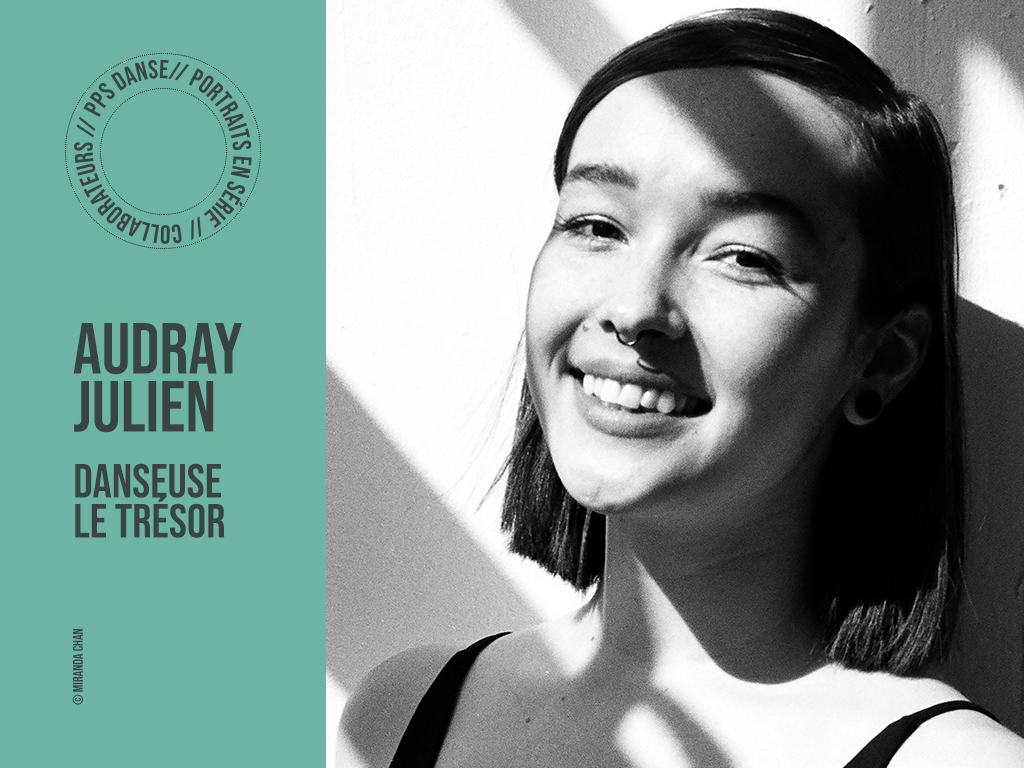 I spent my entire childhood and adolescence in Saint-Hubert, on the South Shore of Montreal.

How many years have you been dancing?
I think I’ve always danced.

What is your way of working?
In the studio, I like to work in a space where involvement in the work is high and sustained but where an exchange is possible, welcomed, encouraged. I definitely learn and perform better in a collaborative work atmosphere that combines focus and caring.

What are the initial guidelines you are given or like to receive?
In the context of Le Trésor (The Treasure),  the initial guideline was to learn the choreographic sequences created by Chantal Baudouin and Nicolas Boivin in the first step of the creative process. I was invited to immerse myself in the universes they had initially set up.

Then came the work to find a way to link my own sensibility to what had been created before my arrival, to establish a vein that resembles me through these universes. Over time, I was able to begin to use this vein as a new foundation to contribute to the creative work that remained to be done.

Does the coherence of the character you play come in stages, or do you have an initial idea of what it should represent?
The character I play in Le Trésor, unfolded gradually since there was first the moment of transmission of the role by Chantal. I very much appreciated her sharing with me her own images and feelings from her experience in the first part of the process. It fueled my understanding of the character of the little girl, where she came from and the nature of the relationship between her and her brother. This step also allowed me to identify the proposed feelings that I felt comfortable working with and the images that I needed to keep looking for to make it stick on my side.

As a second step, I was invited to contribute further to the creation of a few paintings. A more involved version of my character developed. Then, as I got to know Nicolas in the work, a beautiful complicity developed between us, between our characters, which definitely nourished my interpretation of the role and allowed a natural connection.

What, for you, makes the difference in your work for young and adult audiences?

The themes are all different, very much focused on different games in the particular case of Le Trésor, but in my opinion, the “basis” of the acting work remains the same. Concretely, the work done in the studio is not so different. There is the learning of choreographic sequences, the physical and intellectual work, the construction of a guiding thread in time and space, the work to be done on the feelings to be awakened. However, the little girl in The Treasure is not a thousand miles away from the child I was or even, from the adult I can be. It’s about connecting with the part of me that knows how to be enthusiastic, imaginative and available, or letting myself be thoughtful, sometimes bored as the show opens on rainy day tableaux.

On the other hand, one of the key elements of the show for young audiences for me is this consideration of the long-term impact that the performance could have on the spectators. I remember very well the dance shows I saw when I was young, the impression it left me, the desire to experience it myself. It is a significant and beautiful opportunity to be able to share the medium of dance with young eyes. Hoping to get them maybe even interested in it?  Key words: sharing, continuity, awakening, sensitivity.

It is important for me to conclude by thanking the PPS Danse team and the collaborators who contributed to the experience of the show Le Trésor.