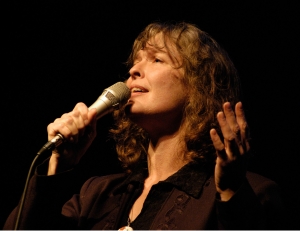 Karen Young was born in Montreal, Quebec. She started in folk music in the late 1960s with Garden Of Ursh (1971), and moved into jazz in the mid-1970s with the successful bebop vocal group, Bug Alley, of which she was a member from 1975 to 1979. In the early 1980s, she played the lead roles in the musical theater productions Mata Hari and Angel, written by David Rimmer and Edward Knoll.
In the mid to late 1980s, she was a member of the celebrated bass and vocal duo, Young and Donato, with Montreal jazz bassist Michel Donato. Their album Young & Donato was nominated for a Juno Award in 1985. The next album, Contredanse, won a Felix Award for Best Jazz Album in Quebec in 1988. The duo toured four times in France (1987-90) and the United States (1989-90), as well as a few concerts in England in 1989.
She toured with her groups mostly in Canada in the early 2000s, such as at the Kaslo Jazz Festival (2003) with a psychedelic style of music or as a member of the Sylvain Provost Trio at the Festival Jazz en Rafale (2008).
His eclecticism and familiarity with world, classical and jazz styles allow him to present works ranging from traditional, Latin and contemporary jazz to, more recently, medieval (album me, corps et désir, 2007) and electro jazz (album Electro-Beatniks, 2009).
Young created her own independent label in 1991, Les Disques URSH. Since then, she has released nine albums featuring combinations of artists from different backgrounds and musical traditions.