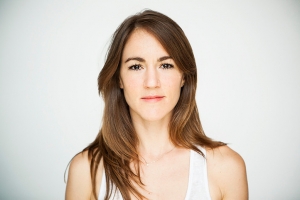 Roxane Duschesne-Roy holds a DEC in classical dance performance from the Cégep du Vieux-Montréal in concert with the École supérieure de ballet contemporain. She dances for the School’s company, the Jeune Ballet du Québec and is also part of the cast of The Nutcracker for Les Grands Ballets canadiens de Montréal. Roxane made her professional debut by partnering with Cas Public, led by Hélène Blackburn, in the fall of 2003. Since then, she has been active on the national and international scenes with Cas Public.

She is part of several productions, including Estelle Clareton’s Furies/Gamma, Sylvain Poirier’s Others, Ismaël Mouaraki’s Loops for urban dance, Johanne Madore cie Corpuscule Danse’s Le baiser, Georges-Nicolas Tremblay’s Interdit de s’embrasser and Pierre Lecours’ Les Steppes. In addition, she is involved in the distribution of three short films, Sur le fil et Boite noire from the Mass Vidéo Film productions as well as Training Session by director Christian Lalumière. Roxane also joins the show Danse Lhasa Danse, a production of PPS Danse and Coup de coeur francophone. In addition to her job as an interpreter, she is very involved in teaching dance. Given her great passion for music, she also performs as a percussionist-dancer. In 2011, she co-founded Le Broke Lab, a collective dedicated to micro-laboratories for research and creation, with performers Merryn Kritzinger and Susan Paulson.