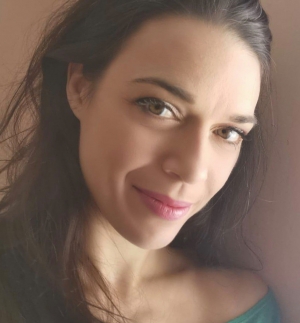 A native of Quebec City, Sara is a graduate of the École Supérieure de Ballet Contemporain. Recipient of numerous awards of excellence, including that of the Lieutenant-Governor of Quebec, she has distinguished herself within the Jeune Ballet du Québec. On several stages around the world, she performs creations by many choreographers including Shawn Hounsell, Hélène Blackburn, Mario Radacovsky, Victor Quijada, Christophe Garcia, Thierry Malandain, Kristen Cere, Iréni Stamou and many others.

From 2003 to 2006, she danced with Les Grands Ballets Canadiens de Montréal for the production of The Nutcracker, in the roles of corps de ballet. After graduating from ESBCM in 2006, she joined BJM Danse as a Dancer-Performer where she performed in plays by Azure Barton, Rodrigo Pederneiras, Crystal Pite and Mauro Bigonzetti.

In the summer of 2009, she became a member of ezdanza, a company run by Edgar Zendejas, for which she still dances today. In addition, in 2010, she joined the company Danse K par K, directed by Karine Ledoyen for the creation of the show Air then in 2012, for a work entitled Trois Paysages. Since 2011, Sara has been part of the Danse Lhasa Danse show, directed by Pierre-Paul Savoie, in collaboration with Coups de cœur Francophone.

As an independent artist, she also participates in several choreographic, cinematographic and video clip projects and collaborates with various schools as a teacher, assistant choreographer and choreographer.