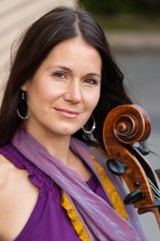 Nova Scotia-born cellist Sheila Hannigan is a graduate of the Master of Arts in Performance program at the University of Montreal, under the auspices of Mr. Yuli Turovsky.

She has participated in masterclasses in Banff and Switzerland, and has also received a CALQ scholarship to study non-classical music with cellist Eugene Friesen at Berklee College in Boston.

Passionate about world music, she also performs with Cordâme, Romulo Larrea Tango Ensemble, QAT, Absinthe, touring the US, Europe and Canada. She performs as a duo with the Franco-Brazilian singer Bia, with whom she tours in Quebec, Canada and Brazil.

Ms. Hannigan was a guest soloist on the Canadian tour of the rock band Tea Party, and has collaborated in the studio and on stage with artists such as Pierre Lapointe, Bia, Rémi Bolduc, Florence K, Richard Seguin, Patrick Watson, and was part of PPS Danse’s Danse Lhasa Danse tour from 2012-2015.