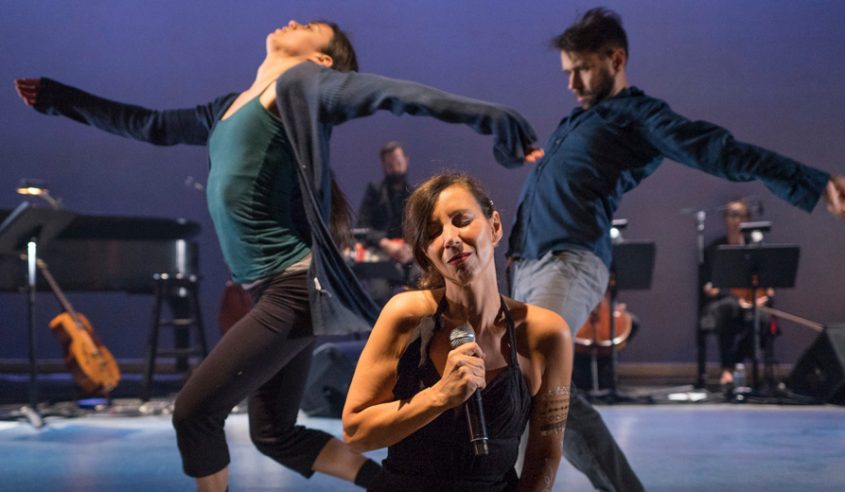 PPS Danse embarks on an outstanding 2017-2018 season in Québec with four different shows being presented across the province: the powerful Corps Amour Anarchie/ Léo Ferré kicks off the Québec tour; followed by the poetic L’École buissonnière (Playing Hooky) which has also been invited to perform in Hong Kong; the now classic Bagne continues its sensational tour in Laval; while the imaginative Les Chaises (The Chairs) is set to delight young and old alike in east-end Montreal. Mark your upcoming calendars! 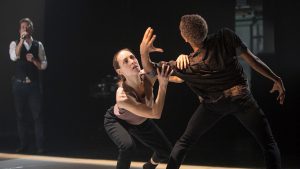 Created in 2016 to mark the 100th anniversary of Léo Ferré’s birth, Corps Amour Anarchie / Léo Ferré celebrates the work of this great French poet and composer. Conceived and directed by Pierre-Paul Savoie, under the musical direction of Philippe B and Philippe Brault, this interdisciplinary show revisits Ferré’s work in a marvelous amalgam of poetry, music and contemporary dance. Featuring an impressive 15 artists on stage including four singers, five musicians and six dancers, the performance soars to the voices of Bïa, Alexandre Désilets, Michel Faubert and Catherine Major and the choreographies of Anne Plamondon, David Rancourt, Emmanuel Jouthe, Hélène Blackburn and Pierre-Paul Savoie. The songs of Léo Ferré resonate now more than ever through their relevance and sheer magnificence.

The show Corps Amour Anarchie / Léo Ferré can be seen at the Cinquième Salle of Place des Arts on November 8 and 9, 2017 as part of the Coup de cœur francophone. A showcase is also planned for November 28 as part off Parcours Danse, followed by a tour of 14 Québec municipalities in March and April.

This creation benefited from a residency at Place des Arts.

For the first time, PPS Danse will be in China! The occasion is ripe to develop new links, to be discovered by a Chinese public always curious and avid for new things, with works from the company’s youth repertoire. The English version of Playing Hooky will be presented at the Hong Kong Arts Festival on March 3 and 4, 2018. An adaptation of the show will also be realized with some 30 youngsters aged 12 to 18 from a disadvantaged neighbourhood of Hong Kong. The fruit of this effort will also be presented at the Hong Kong Cultural Centre on March 5, and in the young performers’ neighbourhood on March 6.

Playing Hooky draws on the unique and captivating world of poet Jacques Prévert, as a celebration of songs, music, children’s rhymes, creativity, perseverance and camaraderie.

Nearly 50 performances are planned throughout Québec. PPS Dance is especially pleased to be reaching many families and school audiences: a major series of shows will be presented at Beloeil, St-Jean-sur-Richelieu, Longueuil and Laval. The company is eager to present the poetry of Prévert to these enthusiastic and attentive audiences. In addition, cultural action activities will be offered in the schools associated with the Maisons de la culture Mercier and Frontenac and at the Salle Pauline-Julien, thanks to support from the City of Montreal and the Une école montréalaise pour tous program of the Ministère de l’Éducation et de l’Enseignement supérieur.

Once again Pierre-Paul Savoie calls upon Benoît Côté who composed the music for Contes pour enfants pas sages (Tales for Naughty Children) and Les chaises (The Chairs). The composer breathes new life into the musical forms of nursery rhymes and children’s songs, accompanied by the voices of Alexandre Désilets and Amylie.

A co-production of PPS Danse and Moncton’s DansEncorps.

Bagne, the company’s highly-acclaimed work, created in 1993 and revisited with performers Lael Stellick and Oliver Koomsatira, will be presented at the Maison des arts de Laval on Wednesday, November 29, 2017.

In offering this creation to a new generation of male dancers and inviting the first-time collaborators to revisit the work, a fresh reality and timelessness is achieved, infusing the original statement. A re-creation whose universality profoundly touches the audience while being discovered by a new public and new generations. 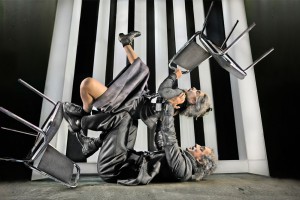 Children from the Rivière-des-Prairies–Pointe-aux-Trembles borough will have the chance to see Les chaises (The Chairs), a tragicomedy choreographed by Pierre-Paul Savoie based on the famous play by Ionesco. A series of 8 performances of this show will be presented at the Maison de la culture Pointe-aux-Trembles from April 9 to 12, 2018, featuring seasoned performers Heather Mah and Sylvain Lafortune, with input from Marie-Ève Carrière.

An inspiring program of cultural activities!

Cultural action is a major component of the activities offered by PPS Danse to its young audience. These encounters with teenagers and children prove mutually enriching with both sides giving and receiving. By offering a greater number of youth workshops, the company is extending its creative resources to provide more exchanges and to stimulate the creation of works where different artistic disciplines converge and freedom of expression is highlighted.

For the 2017-2018 season, nearly 300 cultural action workshops will be shared with youngsters from various Montreal neighbourhoods. The workshops will focus mainly on the company’s works for young audiences, namely Les chaises (The Chairs), L’École buissonnière (Playing Hooky) and a new project, Rupture inaugurale. Through all these encounters, the Artistic Director and choreographer, Pierre-Paul Savoie, wishes to foster the discovery and appreciation of this art form which is dance, and to elicit the wonder and curiosity of participants.

Tours and creations: an exciting 29th season!
Scroll to top